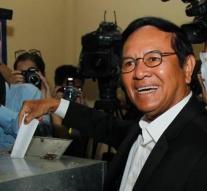 hnom penh - The United States demands immediate release of Cambodian opposition leader Kem Sokha. The authorities in his country accuse the politician of having co-sued the United States to seize power, but Washington said nothing about it.

'All accusations that you have heard about the US in recent weeks are all wrong,' said US Ambassador William Heidt in a statement. The diplomat also stated that 'in the past few years, the US was the target of false, misleading and unjustified accusations over the past year. '

The arrested CNRP party leader is seen as the only significant rival of Prime Minister Hun Sen, who has been in power for decades. The prime minister has threatened to dissolve the opposition party if it does not withdraw aid to the sokha accused of treason.