Home / World / US could come back to climate change 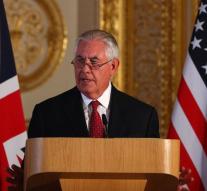 washington - The United States could remain involved in the climate agreement of Paris if a number of conditions were met. That's what the US Secretary of State Rex Tillerson said in an interview with the CBS channel.

According to Tillerson, President Donald Trump wants to contribute to the agreement if it is adjusted to be 'fair and balanced' for the US and sufficient account is taken of US economic interests. Tillerson advocated, among other things, less stringent requirements for the US to reduce CO2 emissions, according to US media.

Trump announced earlier this year to withdraw its country from 'Paris', especially because it would negatively cover the climate agreement for American business.

At the climate conference in Paris in 2015, countries agreed to take measures to ensure that temperatures do not rise above 1.5 to 2 degrees Celsius this century. It has also been decided that richer countries will provide financial assistance to countries vulnerable to the effects of climate change.