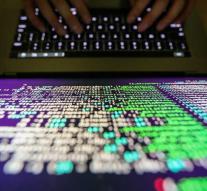 washington - The American authorities are going to prosecute a suspected North Korean hacker. This Park Jin Hyok is associated with cyber attacks on Sony Pictures and the central bank of Bangladesh. He would also be behind the distribution of hostage software Wannacry.

WannaCry managed to infect hundreds of thousands of computer systems in 150 countries in just a few days last year. The systems were locked and the makers demanded a few hundred euros in bitcoins.

In the cyber attack on Sony Pictures in 2014, internal documents and data were lost. North Korea was angry at the company at the time because of a comic film about an assassination attempt against the North Korean leader. Hackers took tens of millions of euros from the central bank of Bangladesh two years later.

The US also impose sanctions on Park and its employer Chosun Expo Joint Venture. The Ministry of Finance says they have links with the North Korean government.