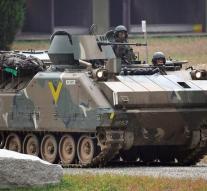 washington/seoul - The United States is considering taking down all ballistic missile shooting North Korea, even if they do not constitute a threat to America or its allies. That reported CNN Tuesday on the basis of a source within the US government.

About seven hundred men American and South Korean troops practicing north of the South Korean capital Seoul, at Pocheon about 30 kilometers from the border with North Korea. That country shot off a ballistic missile last Friday, despite a series of international sanctions and UN resolutions that ban that.

South Korean press office Yonhap reported that US Defense Minister Jim Mattis suggested in the Pentagon on Monday that the US could act in a military manner against North Korea without the danger of the South Korean capital Seoul. Mattis did not say what military action he meant.