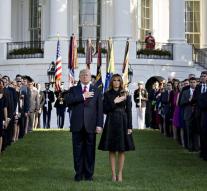 washington - In the United States, Monday saw the nearly 3000 victims of the terrorist attacks of September 11, 2001.

President Donald Trump first took a minute's silence in the White House and then participated in a Pentagon Memorial.

'The terrorists who attacked us thought to sow fear and weaken our spirit. But America can not be intimidated. Those who try to get it quickly, listen to our enemies, who have the courage to test our courage, 'said Trump. 'Even though our country has been wounded today, we are reminded of today's world that terrorism will never win from the US,' added Minister Rex Tillseron (Foreign Affairs).

Sixteen years ago, Islamic terrorists flew into two World Trade Center in New York, with hijacked airplanes. The Pentagon in Washington was also a target. A fourth device collapsed in Pennsylvania.