Home / World / US commands in action in Philippines 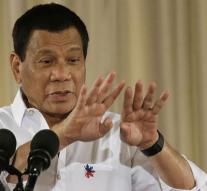 manila - Special American units are involved in the fight against extremists on the Philippine island of Mindanao at Manilla's request. They assist in the fights around the city of Marawi, where 23 May have entered into jihadists with ties with the Islamic State (IS) terrorist group.

A spokesman for the US Embassy in the Philippine Capital confirmed on Saturday that US troops were deployed. Relations between Philippine President Rodrigo Duterte and Washington for months were very bad.

Manilla has also confirmed that the Philippine troops receive military assistance from Marawi's 'Technical Assistance' battle. But those Americans would not be in the fights themselves.

On Friday, thirteen Philippine marines were thrown into battle, according to the army. The Philippine forces have already lost 58 men in and around Marawi. There would also be twenty citizens and more than one hundred jihadists killed. Military sealers announced Saturday that the battle must be settled on Monday. Monday is the national holiday.

The main group of jihadists in Marawi calls the Maute group, named after two criminal brothers Abdullah and Omar Maute. A spokesman for the Philippine army said on Saturday that 'there are strong indications that the brothers have been killed' in Marawi.

The Maute group was barely known until recently. The Filipino army has great difficulty in becoming the leader. The three-year-old movement would consist of jihadists from other groups on the island, supplemented by foreigners. In 2015, the Maute group called for 'subsidiary' of IS.