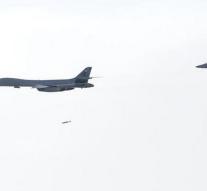 seoul - Two American bombers have shot ammunition shooting in South Korea on Saturday. During the practice, the aircraft bombarded a rocket launcher and underground army base, so the South Korean army has announced.

The exercise was a response to the launch of a new type of intercontinental ballistic missile (ICBM) fired from North Korea on Tuesday. With such a rocket, North Korea could reach the US.

The B-1B bombers escalated from the US base on Guam and were accompanied by fighter jets of US and South Korean air force. According to the South Korean press office Yonhap, the bombers flew near the demilitarized zone on the border with North Korea after their mission.