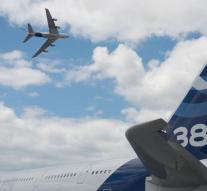 washington - A part of Airbus A380 aircraft has to be investigated. The US Aviation Authority FAA decided that after problems with the Air France's A380 engines. That had to be a landing last month after splitting one of the engines apart.

These are engines with Engine Alliance, a collaboration between General Electric and Pratt \u0026 Whitney. The engine maker had sent a service message to his customers.

According to the FAA, there is an 'unsafe situation' that 'probably exists or can develop' in other engines of the same type. Airbus says its full cooperation with the research. General Electric and Pratt \u0026 Whitney were not available for comment.