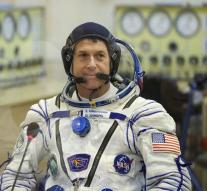 houston - No American will Tuesday be such a floating voter Shane Kimbrough. Literally, because the astronaut is weightless in the International Space Station, four hundred kilometers above the earth. The complex is a temporary polling station for the only American on board. Even beyond the Earth Americans keep theirs.

The US space agency NASA on Sunday further explains how the elections are conducted in space. Flight controllers mailed a digital ballot into space. The astronaut can fill on Election Day and encrypted e-mail back. An official in NASA's hometown Houston gets the voice inside which counts them.

Astronauts see voting as a civic duty, they want their compatriots to give a good example. ' The more we can do to make people vote, the better. If this man can vote from space, I can look at my local polling station, '' expressed astronaut Leroy Chiao message a few years ago. He was the first American who released a vote for a president from space in 2004.