Home / World / US are prohibiting travel to North Korea 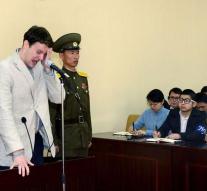 Koryo Tours said the ban on July 27th will be announced and will come into force thirty days later. The organization did not say how long the ban will last. Another tour operator, Young Pioneer Tours, reported in a Twitter message that it was also informed of the decision.

Young Pioneer was the agency that American student Otto Warmbier brought to North Korea. He was arrested and sentenced to fifteen years of forced labor. North Korea released the coma-hit American in June. He died a few days after returning in the US.