Home / World / US are preparing for 83-year-old execution 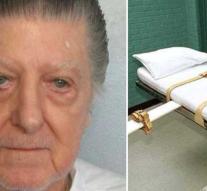 montgomery - The authorities in the American state of Alabama are preparing for the execution of an 83-year-old man. Murderer Walter Moody thus becomes the oldest person to be put to death since 1976, the year in which the Supreme Court reversed the national suspension of the death penalty.

Moody sent a bomb by mail to a judge in 1989, who lost his life. Later he also sent a fatal bomb package to a civil rights lawyer. Moody, according to prosecutors, wanted to take revenge on the judge because of a previous conviction. He would have sent the second bomb to put researchers on the wrong track.

The man himself has always insisted on being innocent. He has been on the death row for more than twenty years. His lawyers have asked the Supreme Court to put a stop to the execution, which must take place on Thursday in a prison in Atmore.

Currently, according to the Death Penalty Information Center, 77-year-old John Nixon is the oldest person who has been put to death since 1976.