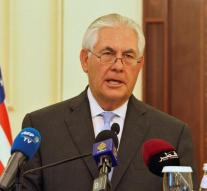 doha - The United States and Qatar have agreed to tackle the cash flows of terrorist organizations. US Secretary of State Rex Tillerson (Foreign Affairs) signed the agreement in Qatar's capital, Doha, on Tuesday, to mediate in the conflict between the Gulf State and other Arab countries.

Tillerson said at a joint press conference with his Qatar official that months have been spoken about the deal. 'This memorandum explains what steps each country will take over the coming months and years to disrupt and stop terrorist money flows,' said the American.

Qatar minister Muhammad bin Abdulrahman al-Thani (Foreign Affairs) emphasized that the deal with the US has nothing to do with the quarreling between his country and the four Arab states, which doctors in particular accuse financially support to extremist organizations. Qatar denies that.