Home / World / 'US and France to attack on Mosul' 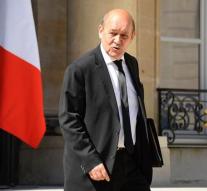 - France and the US are preparing a joint attack for terrorist organization Islamic State (IS) in the Iraqi city of Mosul. That explained a spokeswoman for the French government on Wednesday.

According to the spokeswoman, the French Defense Minister Jean-Yves Le Drian is currently in Washington to discuss the attack in Mosul with the Americans. Mosul is by far the largest city which is owned by IS.

The Iraqi army began an offensive to liberate the city in March, but failed. After three weeks, the campaign was interrupted while awaiting reinforcements. Since then, international talked about a joint approach.