Home / World / US and EU further talk about laptop ban 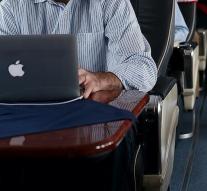 brussels - The United States and the European Union will talk in Washington next week about how they can face risks and terrorist threats in air traffic. This is evidenced by a joint statement after consultation in Brussels on Wednesday. The European Commission had invited the Americans to clarify their plans to ban laptops, tablets and cameras in hand luggage on EU-US flights.

National Coordinator for Terrorism and Security (NCTV) Dick Schoof was also present. According to EU sources, US Interior Minister Elaine Duke has informed the EU Commissioners for Transport and Home Affairs and the airline and security experts from seven countries with major aviation interests 'informed about the background of the laptop ban. 'Because of the security aspect, nothing else was brought to the top of the content.

READ ALSO: What if a laptop ban is applied immediately?

According to the statement, 'the attendees exchanged information about the seriously increasing threat of aviation safety and the way in which they deal. 'They also talked about existing safety standards and detection capabilities,' as well as recent security improvements on both sides of the Atlantic with regard to large electronic devices in the checked luggage. '

The Americans would like to take the measure out of fear of explosives in electrical devices larger than a telephone. The commission wants the EU to take a joint position. According to a diplomat, the information is first evaluated in the capital cities.

A spokesperson for the committee said earlier Wednesday that 'any threat to the US is also a threat to Europe. It is important that we work together. Information must be shared and the answer should be common. '

The US already has a laptop ban on incoming flights from ten airports in the Middle East. Great Britain has imposed a similar ban on direct flights from Turkey, Lebanon, Jordan, Egypt, Tunisia and Saudi Arabia.