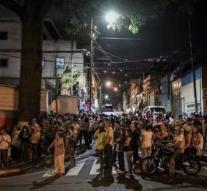 caracas - A helicopter pilot bombing 27th of June government buildings in the Venezuelan capital, Caracas, reappeared on Wednesday. The 36-year-old police officer, pilot and amateur actor Oscar Pérez showed up on YouTube on Tuesday on Wednesday with a message of perseverance in protest against the government.

He considers him to be a terrorist because he and the High Court and a ministry collided with accomplices from a police helicopter. Pérez has since been traceable

Pérez sat for a Venezuelan flag next to an automatic weapon and called his countrymen to 'keep in the streets, because the moment is now and not tomorrow'. For a long time there have been massive and bloody protests against the government of President Nicolás Maduro, which is very unpopular due to mismanagement and the shortcomings in the country.