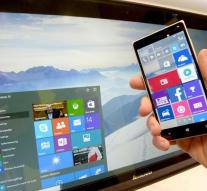 redmond - Microsoft has come up with an updated operating system Windows 10, which was launched about a year ago. The systems are updated automatically, but who wants to wait not stop there, can update manually.

Windows 10 Anniversary Update will include Windows Ink, which allows users to write in digital sticky notes, and improved antivirus Windows Defender. The digital assistant Cortana can be used if the computer is locked. It is also possible to better control the Xbox with your voice with Cortana.