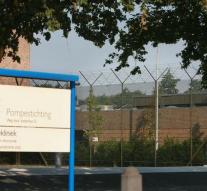 rotterdam - The 50-year-old tbs'er escaped earlier this month from the Pompekliniek in Nijmegen was arrested.

He was arrested in the vicinity of Rotterdam Hoogvliet, confirming the OM to Omroep Gelderland. The tbs'er escaped on August 17 by making a hole in the clinic with a concrete scissors.

In 2011, the Rotterdammer was sentenced to six years of cell and tbs for a series of attacks on textile and drugstore jobs in 2009 in Burgum, Wolvega and Ommen. In January 2016 he was again convicted of a theft with violence.