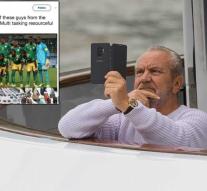 moscow - Players and officials of the Senegal football team are fierce on businessman, billionaire and TV personality Lord Alan Sugar. He made a misplaced joke on Twitter. Senegalese politicians call for his resignation.

Sugar shared a photo of the Senegalese team on Twitter. 'I know these guys from the beach in Marbella', he added, accompanied by photos of all sorts of sunglasses and handbags, which are sold to sellers in the popular beach resort.

The comparison put angry blood at the president of Senegal. His advisor Youth and Sport, Ndongo Ndiaye, calls them 'harmful' to the players. 'Everyone here talks about it. Of course there must be freedom of speech. But this was very wrong. If I were his boss, I would have fired him. '

Alan Sugar is no stranger to the football world. The businessman, whose assets are damaged at more than a billion euros, was chairman of football club Tottenham Hotspur between 1991 and 2001. Also known from the BBC series The Apprentice.

The tweet has now been removed. In a statement, Sugar admits the failure of his 'attempt at humor'. 'I regret it. '