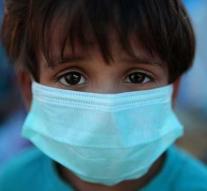 dhaka - The planned return of Rohingya refugees to Myanmar leads to unrest in the camps where they were taken care of. Dozens of displaced people clearly did not want to be sent back during a visit by the special UN rapporteur Yanghee Lee with banners.

Around 655,000 Rohingya have fled to Bangladesh from Myanmar. The displaced populations started in August after the Myanmar army reacted violently to attacks by Rohingya insurgents. Witnesses stated that soldiers were guilty of massacres, rapes and arson.

Neighboring countries Bangladesh and Myanmar have meanwhile made agreements about the return of the refugees. That process must take no more than two years and starts Tuesday. The plans include the arrival of transit camps.

Not all refugees want to return, for example because they fear security. They also want their destroyed houses, schools and mosques to be rebuilt. Displaced Rohingya further ask for recognition as citizens of Myanmar. They are actually stateless at the moment.