Home / World / Unrest in Israel by shutting down rail work 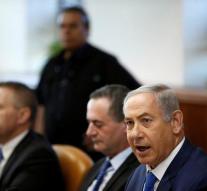 jerusalem - The shutdown of rail operations has during the Sabbath in Israel led to chaotic conditions. Commuters arrived in kilometer-long queues and hundreds of people demonstrated against the disruption of rail traffic between the cities of Haifa and Tel Aviv.

Prime Minister Benjamin Netanyahu had decided that had to be postponed for Saturday's scheduled work on the track because of the Sabbath. Thus he came to meet the needs of ultra-Orthodox coalition partners, who feel that should not work during the Jewish Sabbath.

Because a portion of the track was dismantled shortly before the start of the Sabbath, the Sunday trains had to be shut down to complete the work. According to the newspaper Haaretz affects the decision about 250 000 commuters. Duped travelers rely on replacement buses.


Not everyone seemed to be happy with the genuflection for ultra-Orthodox Jews. Hundreds of protesters took to the streets Saturday in Tel Aviv and Haifa. They had been told that the trains between the cities would be resumed Sunday night.

Netanyahu himself pointed the finger at Transport Minister Yisrael Katz, a rival in his Likud party.,, Ministers are appointed in order to prevent crisis, not to create them, '' the prime minister sneered.

According to a statement from the office of Netanyahu sends Katz on,, disrupting the relationship between the prime minister and the ultra-Orthodox public. ' The transport minister has not yet responded to the criticism.