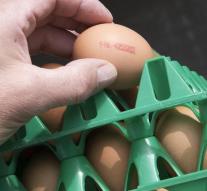 germany - In Germany there has been anxiety about eggs from the Netherlands and Belgium after the discovery of the forbidden drug fipronil. The North Rhine-Westphalia bordered by the Netherlands has now called back almost a million eggs.

This happened after the poison in eggs was discovered at a place of distribution and packing at the place Borken. Through the distribution point, 1.3 million eggs were also transported to the state of Lower Saxony. The Ministry of Agriculture in that state has now advised to withdraw it from the market. It is not known whether eggs with poison have also come into other Länder.