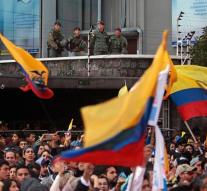 quito - The final results of the presidential elections on Sunday in Ecuador late in coming. The army has warned not to accept irregularities, reported El Comercio newspaper Tuesday.

The electoral council announced that the final results until Wednesday known. This, according to spokesmen of the opposition highly unusual. They suspect tampering with the results of its authorities to avoid a second round of elections on April 2 is needed. Demonstrators harass the headquarters of the Electoral Council in Quito because they think the government candidate is favored.

There is almost 90 percent of the vote counted and head, the candidate of the left-wing government, Lenin Moreno Garcés, with over 39 percent of the vote. The main opposition candidate is clear from the preliminary results of the banker and former minister Guillermo Lasso Mendoza which stands at 28.3 percent. A second round, according to the electoral system is not necessary if Moreno is about 40 percent and ahead of Lasso remains so large.