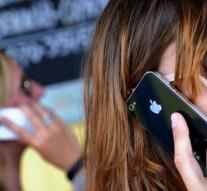 brussels - Europeans may unlimited mobile calls at no additional cost from next summer and internet in other EU countries. The previously proposed restriction of ninety days is completely out of the track.

That made Vice President Andrus Ansip of the European Commission on Wednesday. Or get telecommunications companies the ability to take action if they detect abuse. How this is precisely controlled, remains to be determined.

The so-called roaming charges are abolished within the EU on June 15, 2017. The European Commission had proposed more than two weeks to impose limitations, but committee chairman Jean-Claude Juncker withdrew shortly afterwards in because of the many negative reactions.