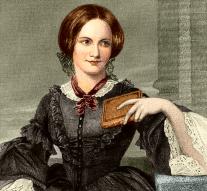 london - A book which was owned by her mother, an unknown story and a poem by the British writer Charlotte Brontë emerged. The literary Brontë Society showed the Guardian newspaper Thursday that the existence of the book by Maria Brontë was known, but not the remarkable content.

The Brontë family sold the book in question, The Remains of Henry Kirke White of the writer Robert Southey in 1861 to an American collector. It was recently purchased by the Brontë Society and was found to contain all sorts of loose papers. The story (74 lines) and the poem (77 lines) wrote Charlotte when she was young. Both are dated in 1833, when she was seventeen years old.

Maria Brontë died when her six children were young. Her daughters Charlotte, Emily and Anne grew to become world-famous writers.