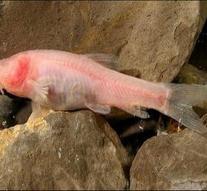 - Scientists in northern Iraq accidentally discovered a hitherto unknown freshwater fish. It is an about 8 centimeters long, blind loach who lives deep in underground reservoirs. Due to heavy rains and floods in the mountainous region of Kurdistan were surprisingly copies surfaced.

Most fell prey to birds but the Iraqi biologist Korsh Ararat could save a couple of colorless fish without eyes and scales. He sent these to include DNA testing to Germany. That indeed proved to be a new species, which was named Eidinemacheilus proudlovei.

The Berlin specialist Jörg Freyhof suspect the 'stranded' Kurdish loach bacterial colonies afgraast on the walls of caves deep underground. On the living conditions of the cold-blooded animal is never possible something known by the inaccessibility of the caves. Where they suddenly came to the surface, has long since dried up again. The discovery now made is described in the journal Zootaxa.