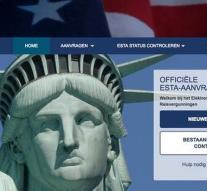 new york - The United States is asking visitors from Europe recently to give their user names on social media. Reported that the website Politico. The plans were announced earlier this year, when widespread criticism that. The introduction is done quietly.

Critics such as civil rights movement ACLU are also angry that nothing has been done to their concerns. Freedom of expression, according to them in the case and a trawl is applied which is not yet clear whether the information is valuable. There is also the fear that other countries are less democratic now will demand social media accounts.

For the time being is to give up social media accounts are voluntary. When filling in the Esta form for entry into the US, various social media like Facebook, Google+, Instagram, LinkedIn and YouTube are selected and specified user names.

The aim of the new scheme is to 'identify potential threats,' 'a spokesman for the US Customs to Politico. Earlier, the department had said it will not reject people if they do not give information about their social media use.