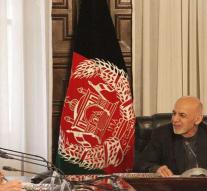 kabul - Afghan President Ashraf Ghani ordered the military to stop taking action against the extremist Taliban until 20 June. Ghani said that the fight against Islamic State and other extremist groups will continue.

The Taliban are predominantly Afghans who belong to the tribe of the Pathans. These extremists led a reign of terror in the country from the mid-1990s to the American invasion of 2001. Since then, they have been attempting to regain power by force.

Islamic State has been active since the beginning of 2015 in the northeast of the country, usually close to the Pakistani border in the provinces of Kunar, Logar and Nangarhar. It is apparently a small terror movement that mainly consists of foreigners, including many Pakistanis. The Afghan IS also fights with the Taliban.