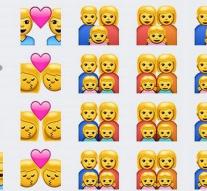 mountain view - After an emoji of a happy trick, there may also be a sad one. It is one of the proposed new smileys discussed in October by the Unicode Consortium, so the organization has announced.

In addition to the sad drol there are dozens of new emoticons on the list, including a festive emoji, a superemoji, a frozen emoji, a fire extinguisher and a test tube. If the new emoticons are approved, they will only be available next year.

In June, the last set of emoji was released. These are likely to be added to the different mobile phone operating systems in the coming months.