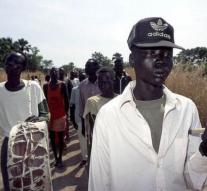 juba - Armed groups in southern Sudan have recruited 1,300 children in 2016. Since the beginning of the conflict in the African country in 2013 have been raised a total of 13,000 children in uniform.

UNICEF, the UN organization that monitors the rights of children, minors considers as the group most affected in South Sudan through violence. 'Now the fighting is increasing again, and despite repeated promises to stop the recruitment of children, children are again being targeted,' said Thursday a spokesman for UNICEF.

Armed groups are not afraid to return to abduct children for the purpose of using them as soldiers. The United Nations also received information that brute force is used against children. South Sudan has been independent since 2011. It fights since 2013 with the northern neighbor Sudan and in addition are many tribes in the country continuously in a deadly conflict.