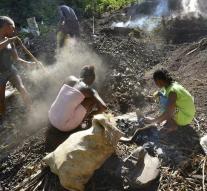 The situation was viewed in 89 countries. Nearly 20 percent of children lived in households in 2013 to pay 1.70 euros per person per day have. Especially in India, the problems are large, the researchers said.