Home / World / UNHCR: Half a million Syrians again at home 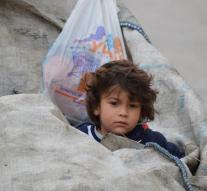 geneva - Nearly half a million Syrians killed for war violence returned home this year. The vast majority, 440,000 people, remained in Syria itself. More than 31,000 people returned from neighboring countries. These figures brought the UNHCR, UN Refugee Organization, out on Friday.

Most returnees come from the cities of Aleppo, Hama, Homs and the capital Damascus. The fact that they dare to return indicates that the security situation in parts of the country has improved. A UNHCR spokeswoman speaks of 'a significant trend and significant numbers. '

According to data previously released by the UNHCR, more than 5 million Syrians have been killed by the civil war in their country. By far most of them stay in neighboring countries. Nearly 3 million Syrians are in Turkey. The small Lebanon officially houses one million Syrian refugees, but the actual number is probably a lot higher as long as not everyone is registered.

In the European Union last year 334. 830 Syrians responded to asylum according to figures from the Dutch Refugee Council.