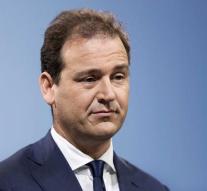 - The job opportunities are increasing, even for long-term unemployed. That said Minister Lodewijk Asscher of Social Affairs and Employment Monday in response to new figures from the Central Bureau for Statistics (CBS) showing that unemployment fell by 80,000.

That part was because fewer workers lost their jobs and partly because more entrants were in the labor work. The labor force grew in the third quarter continued: compared with the same period there were almost 130 000 workers a year earlier at.

'I'm happy for all those thousands of people who have found jobs in recent months. Sometimes they were there to wait a long time, but their wait is rewarded, 'says Asscher. 'I hope that in the coming months, many more people can come to work. I want to do everything. '

Long-term unemployment- those more than a year at home- has also decreased According to the CBS, even under the difficult group of people over 45. However are still more than six in ten unemployed people over 45 twelve months or longer looking for work. Looking at the total number of unemployed is that four out of ten.