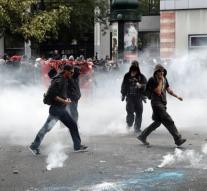 paris - At a trade union demonstration in Paris against the proposed easing of French labor law, Tuesday's irregularities broke out. Groups of masked youngsters threw stones and other objects to the police who responded with tear gas and the use of water guns.

A few riders were arrested and discharged. How many arrests were made, the police could not yet say.

According to the organizers, about 60,000 people participated in the demonstration, reports French media. In several French cities, people protested against labor market reforms proposed by the government of Prime Minister Édouard Philippe at the end of August.

The proposed measures include easing of dismissal and reduction of severance pay. This must make it more attractive for French employers to employ people. Employees fear, however, that their rights are being affected.