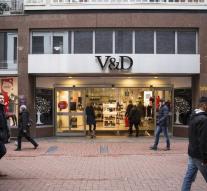 lead - PS | theater, the city companionship of Leiden, is looking for stories of people who have worked at V \u0026 D. It wants to process short fragments thereof in the upcoming show 'We Factory, 'a family drama about the fall of the Dutch industry.

' It is unknown how many similarities there are between the fall of the industry in the last century and the fall of the contemporary department stores now, 'said Pippin Smith, artistic director of the company. ' Then one after the other retail toppled during the preparation of the new piece, it had to have a place, '' Smith concludes.

Former employees can submit their stories via the Internet (www. Wijvandefabriek. Com). The show can be seen next month in the Flour in Leiden.