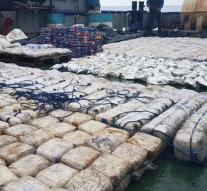 portbands - The Indian Coast Guard intercepted a 1500 kg of heroine from a ship from Iran. The estimated value is approximately 460 million euros. According to the spokeswoman for the Coast Guard Commander, Monday against CNN, it is 'the biggest drug catch in recent India's history.'

The investigation is still ongoing and no arrests have been taken yet. The minimum imprisonment on heroin shelter in India is ten years.

India, through its strategic location, is a gateway to opium from Afghanistan to Europe and North America. 90 percent of opium is from Afghanistan and it is the main component of heroin. India itself is also struggling with a rising drug problem, especially in the northern province of Punjab.