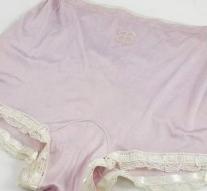 malvern - A purple underpants that belonged to Eva Braun has raised 3250 Euros converted at an auction in the English Malvern. Auctioneer Philip Serrell had counted at 400 pounds, but an anonymous individual was willing to pay 2900 pounds for the gem.

The underpants were the initials of Hitler's later wife embroidered. The buyer also hard hit by the auction of a gold ring and a silver casket with a mirror. In the box was still the lipstick that was Eva Braun. The ring with rubies spent 1400 euros on the box 400. The silver jewel initials EB were engraved.

A collection of black and white photos of Eva and Adolf spent 110 euros.