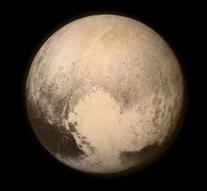 - Pluto probably has an ocean, hiding hundreds of kilometers deep. This can be deduced from measurements of the US probe New Horizons. The study is in the important scientific journal Geophysical Research Letters.

New Horizons flew past Pluto last year and made a lot of pictures and took measurements. This shows that the dwarf planet cracks and fault lines has the surface. These cracks are hundreds of kilometers long and up to four kilometers deep.

The only plausible explanation for the burst is an underground ocean, which is to freeze through the icy cold on the edge of our solar system. The force of gravity is too small to cause such cracking. And ice that has been frozen solid, would be more compact and take up less space, making Pluto would be smaller.,, We conclude that the ocean is not completely frozen, '' the researchers say.,, The possibility that oceans of liquid water are at such a distance from the sun is incredible. ''


Pluto is the great unknown in our solar system. He is so small and is so far away that it was discovered only in 1930, much later than the planets. First Pluto was the ninth planet in our solar system, but he was demoted to dwarf planet in 2006, to the dismay of some scientists.