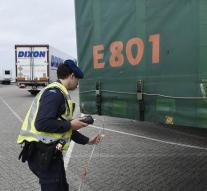 zagreb - The Croatian police have found dozens of refugees were packed into a van with British registration. This was announced by the Croatian authorities Sunday.

Many of them lay unconscious in the overloaded car because they had inhaled or hypothermia were affected monoxide. They were taken to hospitals in the region.

62 from Pakistan and Afghanistan coming migrants were discovered by police on the highway near the town of Novska, approximately 100 kilometers southeast of the capital Zagreb.

The driver of the car who was wheeled fled Serbia from Croatia. He wanted to bring the refugees to Western Europe.