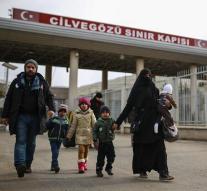 aleppo - There is great uncertainty about possible new evacuations of people from the Syrian city of Aleppo. Friday the evacuations were discontinued put after there would be fired on the bus. Saturday morning it seemed that the evacuation would be resumed as sources of both the rebels and the government reported this. But as far as is known, nothing happened.

The German news agency DPA reported Saturday that buses would have arrived in the two neighboring villages Fua and Kafraja, which would bring it in 1500 wounded and desperate women and children to safer area. But it seems that there, too, to date no one has been evacuated.

According to Reuters, is negotiated even pressure between the two parties about the evacuation.

The UN Security Council vote Sunday on a French proposal to supervise officially the evacuations. It is unclear whether Russia or against the resolution to vote.