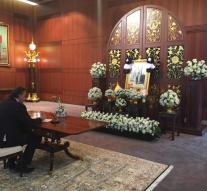 The king held together long Thailand seventy years, is dead. There is a military dictatorship, there is conflict between red (poor) and yellow (rich) shirts, succession is controversial. Are you afraid of outbreaks of violence?

Thailand faces an uncertain time. The king was an authoritative symbol of unity. In his time this country was Asia's second largest economy. You will see mainly unity in grief over the death of the king. That's really deep. The follow-up can be arranged quickly. I do not think we need immediately to fear instability.

You are now in Bangkok. What Netherlands with Thailand?

At the highest political level there are no contacts. Due to the military regime is as agreed in the EU. But of course we show neat to condole our respect by the Thais. That's what I did today.

Does this mean you some delicate issues not touches, such as the imprisonment of Johan van Laarhoven, the coffee shop owner who was sentenced here to imprisonment of 103 years?\n  \n  \n   advertisement

It is about the king. It would not work in favor of the Dutchman as we did were to start over. But I know this place well and I have it here with staff from the embassy in Bangkok sure how it goes with him, and with his appeal. It is now important that this does not take too long.

You're here for the summit between the EU and ASEAN, the ten Southeast Asian countries together economically and politically. Anyway what is happening there yet today?

The top is retrenched, and you notice that the ambition is less. Yet there are good agreements in the field of counter-terrorism, trade and migration. But you really notice when it is Thailand that this country now for something else to the head.