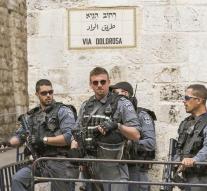 jerusalem - Israeli troops on Friday shot dead an apparently unarmed Palestinian. He walked up to them in a Palestinian village in the occupied West Bank, a military spokeswoman said.

A Palestinian official said the 38-year-old man suffering psychiatric illness and reported a number of Israeli news that there were no weapons on his body found.

,, Israeli troops spotted a suspect to an IDF post (Israel Defence Forces) run in Silwad, 'said the military spokeswoman.,, While the suspect approached the troops fired at him, resulting in his death. The incident is under investigation. '