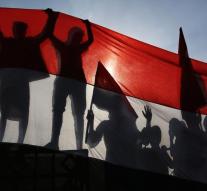 - Yemeni inquiry which oversees how the warring parties in Yemen dealing with human rights is biased and not up to its task. They should be replaced by a committee of the UN Human Rights Council, takes the next-to-highest human rights official of the United Nations.

The plea from Kate Gilmore, right hand of the High Commissioner for Human Rights, is not new. Earlier, a UN commission of experts also broke though a lance for a committee independent of the Yemeni government, which is a party in the civil war, can operate. Netherlands arose last year strongly for such an inquiry, but saw, reportedly under heavy pressure from Saudi Arabia, it off.

An alliance of Sunni countries led by Saudi Arabia in Yemen is fighting on the side of the ousted Yemeni government against the Shi'ite Houthi rebels, who have conquered large parts of the country. Saudi bombings were regular civilian lives requirements.