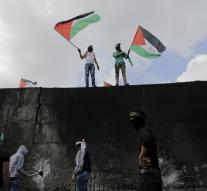 geneve - The High Commissioner for the United Nations Human Rights warned that violence between Palestinians and Israelis can escalate into a catastrophe. Said al- Hussein Council called Wednesday in Geneva the crisis extremely dangerous.

Neither the attacks with knives by the Palestinians nor the shots from the firearms of the Israelis are justified, says the Commissioner. The spiral of violence must now finish and be immediately followed by a peace process, said the Jordanian al- Hussein.

After three weeks of bloody violence, 58 Palestinians have been killed and 2100 injured. Eleven Israelis died. The crux of the matter, says the Palestinian president, Mahmoud Abbas, is that the Palestinians need more assistance from the international community to protect their rights. The UN Security Council 's move to regulate that protection.