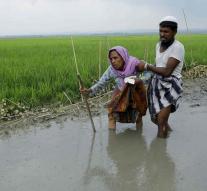 new york - The UN Secretary-General Antonio Guterres has warned Myanmar that the violence in the state of Rakhine is a danger to the whole region. Guterres referred to the violence around the Rohingya, the ethnic Muslims in the country.

Guterres wrote a letter on the explosive situation of the United Nations Security Council. He has proposed measures to reverse the violence. The Portuguese fears a situation in which an ethnic disaster occurs. In Myanmar, the Rohingya are stateless and therefore virtually straightforward. The security forces and the Muslims fight each other on life and death.

The latest outbreak of violence began on August 25, when Muslims attacked police stations and army bases. The following violence has certainly cost four hundred people life. The Rohingya try to reach Bangladesh on a large scale, but it is not enough to catch up with them.