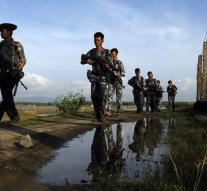 geneva - The UN Office for Human Rights has called on the Government of Myanmar to allow independent observers to the state of Rakhine. The agency claims to receive daily reports of atrocities against Rohingya Muslims are not recognized as citizens by the authorities.

Commissioner for Human Rights Zeid Ra'ad al Hussein said the attitude of the government led by Nobel laureate Aung San Suu Kyi in front of the crisis 'shortsighted, counterproductive and even harshly. 'This approach may ultimately have serious repercussions for the region.

'If the authorities have nothing to hide, why is there so much reluctance to leave us?' Asked Zeid. 'We can only fear the worst. '

Rohingya have been in recent weeks, with hundreds fled to Bangladesh. They come with stories about houses that are burned and relatives murdered before their eyes, said the refugee agency of the United Nations, UNHCR.