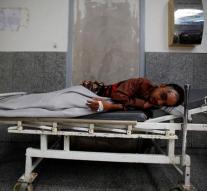 geneva - The High Commissioner for Human Rights Zeid Ra'ad Al-Hussein has called Monday for an independent international inquiry into the air strikes in Yemen. According to the UN since March 2015 by the bombings slain at least 4125 civilians. Certainly 7200 victims were injured. There is sufficient reason to assume that there is a violation of human rights.

Harassing a complex in Sanaa where a memorial service was held was another example. The rocket attack Saturday claimed 140 lives, among them leaders of the Houthi rebels. ' Since the beginning of the conflict in Yemen weddings, markets, hospitals, schools and now taken a funeral gathering under fire. The result was numerous civilian casualties, while totally remained unclear who is responsible for these acts, '' said Zeid.