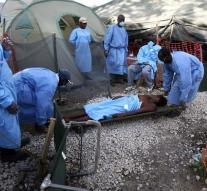 - The United Nations asking the international community 200 million dollars (184 million euros) for the victims of the cholera outbreak in Haiti in 2010. The plans for the million aid mean no admission of guilt, said David Nabarro, Special Representative of Secretary General Ban Ki Moon on Monday in New York.

'We are talking about nothing but moral responsibility for those affected the worst by the cholera epidemic,' said Nabarro. Half of the $ 200 million will go directly to the victims and their families. According to Nabarro comes down to about 10. 000 dollars per family.

The UN has never acknowledged to be legally responsible for the outbreak. According to the Haitian government UN soldiers from Nepal brought the disease to Haiti when she came to help after the earthquake in 2010. Then 50 000 people fell ill and killed more than 9300 people dead.