Home / World / UN: Syria and IS after poison gas 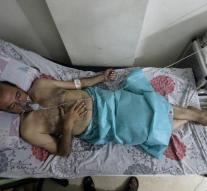 - Syrian government forces and fighters of the Islamic State have deployed poison gas against their opponents. That's the conclusion of researchers from the United Nations and the Organisation for the Prohibition of Chemical Weapons (OPCW).

The researchers took nine attacks in recent months in Syria under the microscope which probably chemical weapons were used. Government forces availed themselves at least twice by poison gas, she noted. IS fighters should at least once have used mustard gas. Increasingly Syrian rebels were targeted.

The Task Force was appointed by the UN Security Council. Which should now look into punishing the perpetrators. Since Russia and the United States respectively support the Syrian government and the rebels, however, seems to accord the board away.