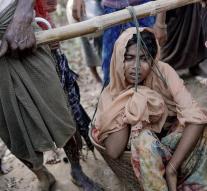 The humanitarian situation is now 'catastrophic,' said Guterres at a press conference.

According to the UN summit, the crisis in the country dominated by Buddhists is destabilizing. Certainly a third of the relocation of the Rohingya population in Myanmar is to be described as 'ethnic cleansing,' according to Guterres.