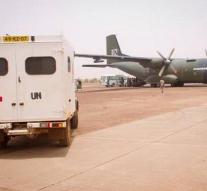 BAMAKO (ANP / DPA)- Three blue helmets were killed by an attack on UN peacekeepers in Mali. Three others were injured, the UN said Friday. The attack was in Kidal in the northeast of Mali.

The nationality of the victims has not been announced. In Mali there are also around 290 Dutch soldiers, but those who work from Gao. UN soldiers are more frequent targets of attacks in Mali, usually conducted by groups linked to terrorism al-Qaeda.